Stand up at work all day? Are you mad!

Standing to attention – by Lisa Woodhouse

Stand up at work all day? Are you mad!
That’s the first response I got off most people when I told them I would be using a stand up desk for a week.
At the start, I must admit I saw it as a bit of a gimmick. However, after talking to Nick White, the man behind I Want A Standing Desk in Clitheroe I was impressed with the alleged benefits and was willing to open my mind.

Nick arrived at +24 Marketing’s Northbridge House offices in Burnley early on a Monday morning with the wooden folded ‘retro fit’ desk under his arm, clutching at a bar stool in the other.
He set up the Eiger desk within seconds. Its sleek, modern design fitted into our modern office well.
It’s attractive design also proved to be practical and ecological. The slatted back acts as different shelf heights for optimum comfort and correct posture, while the desk itself is made from beech tree – a fast growing sustainable timber source.
The bar stool was for perching on when I wanted to take a rest.

There are several kinds of standing desk: hydraulic ones – like those used at Radio 1 – which move up and down, and the retro fit design – which is proving more popular than ever.
The retro fit desk sits on top of your existing desk. For many companies this will prove a lot more affordable than scrapping all their existing office furniture and replacing it with state of the art solutions. 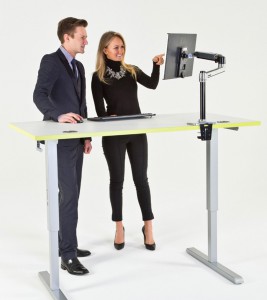 It is suitable for both desktop, laptop and tablet use, and even has a handy slot to perch your iPhone!
It also offers workplaces the opportunity to have a ‘hot desk’ style set up where employees (and visitors!) can use the standing desk for shorter periods of time on rotation.
During Nick’s visit, he told me standing just three hours a day, five days a week, an employee can burn the equivalent calories of someone running 10 marathons! Now that is food for thought.
This generation is one of the most sedentary in history. Employees sit for the majority of the working day. A recent survey revealed that a staggering 73% of employees only leave their desk during the working day for a loo break or to make a cuppa!

The research also revealed that 19% of the polled office workers had put on a stone or more since they started working in an office.
Steven Ward, Executive Director at the not-for-profit organisation UkActive, said: “Spending over four continuous hours sedentary, twice or even three times a day, is a huge amount of time and has a big negative impact on our health.

“Employee health should be one of the top priorities for businesses. Workplace health is as important to employers and employees as annual leave.“
Encouraging people to move more have been proven to not only improve employees’ general health and wellbeing – reducing the number of days lost to workplace ill-health – but
also has a powerful impact on workplace productivity.

“Both lead to a tangible impact on a business’ bottom line and can deliver a return on investment.”
I must admit, I thought standing would be a doddle. After all, it doesn’t need much physical
exertion…

Well, by the end of the first day, I could feel muscles in my legs which I didn’t know existed.
By the end of day three, my muscles were aching in my legs. However, I was standing taller, the pain in my neck and shoulder I get regularly had disappeared – and I felt more productive.
Nick said this was likely to be because of the increased blood flow. Simply standing makes the heart beat 10 beats more per minute which improves blood flow and nutrient distribution to the organs – including the brain.

As the week progressed, I felt like I got a lot of work done. I was more alert, more creative, and generally more active. I slept better at night and even my digestion was better (Like most office workers I eat hunched over at my desk).

The desks have also been used by Anvic Developments at their Northbridge House offices in Burnley to illustrate the modern working environments they provide.
As alien as it felt at the start of the week, I was sad to see the desk go on Friday afternoon.
After the initial shock to the system, I felt a real, tangible benefit to using the desk.

I think there should be at least one standing desk in every office. Why should it be the norm to sit for most of your working day, then sit when you watch TV, sit when you go to the doctors and sit when you dine?

This does however rely on the open mindedness of employers to allow employees to try it and see if it’s for them.
Unfortunately it is drilled in us from an early age to sit down and sit still. The problem is, too many of us do just that.

Here are some other frightening facts:
• When sitting your metabolic rate crashes. You only burn 1 calorie a minute…that’s less than chewing a piece of gum!
• Sitting 6+ hours a day makes you up to 40% likelier to die within 15 years than someone who sits less than 3. Even if you exercise.
• Worldwide studies have warned that a sedentary lifestyle could be causing as many deaths as smoking.
• People with sitting jobs have twice the rate of cardiovascular disease as those with standing jobs…it increases blood pressure and decreases the diameter of arteries.
• Regular exercise regimes do not negate the effects of a sedentary lifestyle…going to the gym 2 or 3 times a week isn’t enough.
• Being sedentary slows down the circulatory system, blood, oxygen and vital nutrients…if your vital organs (including your brain) aren’t getting their full supply of these how can we feel and operate at our best?
• 30 million working days were lost in 2013 as a result of musculoskeletal disorders in the UK.
• One in five UK workers now retire with Type 2 Diabetes. Inactivity is the UK’s No.1 health problem.

You can find out more about which cookies we are using or switch them off in settings.