P3 Computers have donated a further two computers to T.E.A.M R.I.S.E Project in Burnley to be used by their members for everything from Ebay to Video editing

P3 based in Burnley launched a campaign on social media offering up to five refurbished computers to local charities, groups or good causes who would benefit from the technology.

Jo Kinder the General Manager of P3 Computers Said “We replace so many PCs that are in good working condition and still have life left in them. We had 5 to start with and after great support from local people we have now donated the two of these to The T.E.A.M R.I.S.E Project in Burnley”

Sharon Lee the Project Co-ordinator for TEAM RISE said: “These computers are a god-send to us and will benefit so many people, we do not receive any funding so we really do rely on grants, donations, holding sponsored events and the sale of craft products that members of the group make and supply via Ebay and craft fairs. The Project currently costs approximately £40,000 a year to run. The Vedas Group have been a fantastic support to this project and help us in so many ways, from giving us free room space to helping us with our accounts, without them we certainly would not be where we are now”. We only had the use of a laptop and a tablet and some of our members found them difficult to use. This really is a fantastic donation from P3 and we will make the very best use of the computers. The two new computers will be based at our office in St James House, Burnley”

Sharon added: “We have such great local support and we would like to thank P3 Computers for choosing us. These two computers will be a lifeline to our members” 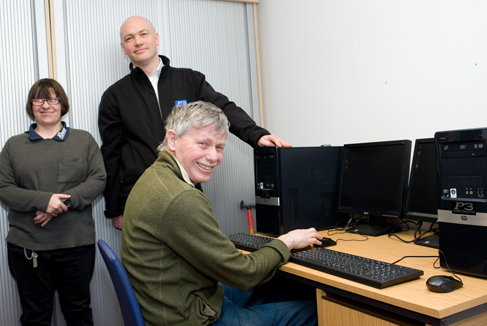 Jo Kinder said: “We had five computers we had refurbished and wanted them to go to a good cause locally. As soon as we launched the campaign we were inundated with messages by supporters of T.E.A.M R.I.S.E on Facebook and Twitter. We think this is a very worthy cause and having met the team, I’m sure they will make good use of the computers.”

The initial 5x computers have now all been allocated, but for every PC purchased from P3 over the value of £250 we will give you £20 for your old base unit, we will then refurbish OR recycle the unit and then all the refurbished units will be donated to a local good cause.